September 1, 2010 Los Angeles, CA World-renowned dog behaviorist Cesar Millan has teamed up with pet safety experts, Bark Buckle UP to launch a new public service announcement, asking pet owners to take the pledge to “Be Smart, Ride Safe.” The Be Smart Ride Safe PSA features Millan and his second-in-command, Blue Pit bull Junior, who are helping to promote the Be Smart Ride Safe pet travel safety campaign. The PSA is being aired nationally to encourage individuals and corporations to take the pledge online to be safer with their pets.

“Pack leaders provide protection and direction,” said Millan. “And when it comes to pet safety, protection is about prevention – that’s what this campaign is all about!” Millan has promoted pet travel safety tips and Bark Buckle UP’s Free Pet Safety Kit on his website, www.cesarsway.com. 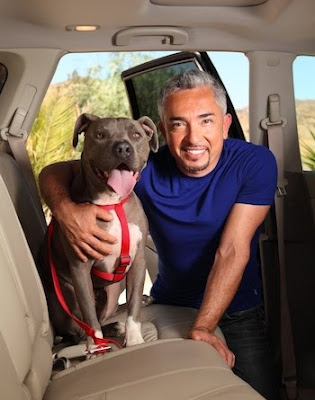 These days, more pets than ever are traveling in vehicles. However, most drivers aren’t taking the steps necessary to ensure that travel is safe for both them and their pets. Most pets travel unrestrained, increasing the risk of pet injury or fatality during an accident. Unrestrained pets also pose risks for the drivers. If an accident occurs while the car is moving at 35 mph, an unrestrained, 60-pound dog is capable of causing an impact of up to 2,700 pounds. If the unrestrained pet survives the crash, he may impede or slow the progress of rescue workers, as they need to tend to the animal and the human victims. First responders nationwide have said that, “any time lost in the caring of accident victims [due to] the need to deal with a frightened or injured animal can and should be avoided.”

Bark Buckle UP is committed to informing pet owners about the dangers of unrestrained pet travel. According to the founder of Bark Buckle UP, “Pet Safety Lady” Christina Selter, “safety belts can only work if you use them – that costs nothing – but not using them can cost lives – pets included.”

FACTS:
• A 60-pound pet can cause a 2,700-pound projectile, even when moving at just 35mph accident
• Pet travel has increased 300 percent since 2005
• Unrestrained pets in vehicles can delay emergency workers’ access to human occupants
• If a pet escapes a vehicle post-accident, it can pose many dangers, including catching the loose pet
• Injured pet may bite rescue workers or others who are trying to help
• Pet may escape through a window or door and cause a second accident
• Driver distraction is common when unrestrained pets are rambunctious in moving vehicles

###
CESAR MILLAN is a best-selling author, a much in demand public speaker, a branded pet care product designer/entrepreneur and, not least of all, an internationally popular and iconic series star of the hit TV show “Dog Whisperer with Cesar Millan,” the National Geographic Channel’s flagship series, currently in it’s sixth season.

Bark Buckle UP founder Christina Selter “Pet Safety Lady” works with first responders nationwide teaching pet safety and has buckled UP more then 10,000 pets. Education is the first step to show that pet safety is connected to human safety, which helps to save lives. Christina has been featured in more then 250 news segments, directed and produced several pet safety PSA’s and created Be Smart Ride Safe-take the pledge Buckle Up the whole family.