Bark Buckle UP and Christina Selter aka: Pet Safety Lady’s dear friend the two year old, golden retriever Ricochet, the SURFice dog who surfs for fun, wins contests and most importantly, has been inspiring millions of people around the world with her paw it forward lifestyle, while raising funds and awareness for human/animal causes, received the 2010 American Kennel Club Humane Fund Award for Canine Excellence in the category of Exemplary Companion Dog. 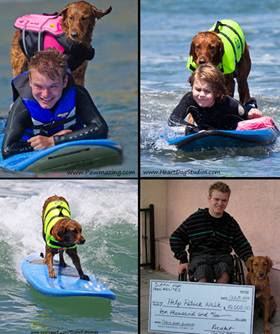 The American Kennel Club Ace award is a national honor, given to only five dogs each year who have performed an exemplary act or series of acts, whether large or seemingly small, that have significantly benefited a community or individual. One award is given in the following five categories: Law Enforcement, Search and Rescue, Therapy, Service, and Exemplary Companion Dog.

In addition to the prestige of being chosen from hundreds of entries, each of the five honorees receives a cash award of $1,000, an engraved sterling silver collar medallion and an all-expenses-paid trip for dog and owner to Long Beach, Calif., to be honored at the AKC/Eukanuba National Championships in December. The engraved names of the five recipients will also be added to the ACE plaque that is permanently displayed on the AKC Library’s “Wall of Fame” in New York City.

Ricochet was slated to be a service dog for a person with a disability, but due to her interest in chasing prey, she had to be released from that role. After proving she could surf by winning 3rd place in the 2009 Purina Incredible Dog Challenge, her title went from service dog to SURFice dog, and she began providing assistance to people with disabilities in a non-traditional manner. She often surfs with disabled surfers from quadriplegic teenager, Patrick Ivison to a brain injured six year old, Ian McFarland. She helps counter-balance the board to keep them from falling off, or motivates them to replace apprehension with excitement.

Shortly after her first fundraiser, a video of her journey titled “From Service Dog to SURFice Dog” was posted to YouTube, and un-expectedly went viral. The attention the video garnered was immediately turned into a platform of helping others on a larger scale by re-directing the attention to numerous human/animal causes. The video also served as a source of inspiration to the millions of people who viewed it, and found their own personal message, bringing them to tears. Many of those people joined her Facebook page of 12,500+ incredibly supportive members.

In the 10 months that Ricochet’s journey has changed course, she’s raised almost $50,000 in donations, and awareness for her causes, which include people with disabilities, the Association of Amputee Surfers, Wheels 2 Water, Life Rolls On, Ocean Healing Group, Surfers Healing, Surfers for Autism, Pipeline to a Cure, Chase Away K9 Cancer, Morris Animal Foundation, Helen Woodward Animal Center, Pets for Patriots, Pets for Vets, Pay It Forward Day, Living The Dream Foundation, and more

Ricochet is honored to receive the American Kennel Club ACE Award, and will continue her commitment to helping others, while encouraging them to focus on the CAN do’s in life, and realize that disappointment can be turned into a joyful new direction! To learn more about Ricochet’s surfing, causes, and fundraisers, visit her website at http://www.surfdogricochet.com or contact Judy Fridono at [email protected]